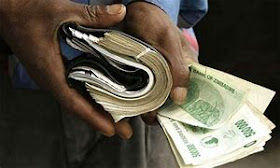 A 29-year-old gold dealer from Bulawayo was left counting his losses on Friday after robbers allegedly waylaid him and made off with US$80 000 that was stashed in his car’s glove compartment.

The incident happened in the evening outside a hotel in the Central Business District where the man had parked his car, a Toyota Allex. National police spokesperson Assistant Commissioner Paul Nyathi confirmed the incident, although he said the circumstances around the robbery were still under investigation.

“We are investigating a case in which a 29-year-old man from Bulawayo alleges that he was robbed while he was parked on a street somewhere in town. According to the man, he was parked when a group of men forced themselves into his car and attacked him. They then bundled him into the back of the car as they made off with some US$80 000 that was in his car. The victim alleges that the suspects did not steal anything else, including the car, but they made off with the money,” he said.

Asst Comm Nyathi urged members of the public to be vigilant and avoid keeping large amounts of money either at home or in their vehicles, as it increased their risk of being raided by criminals. Nonetheless, sources privy to the incident said after the man parked his car along Joshua Mqabuko Nkomo Street, a man armed with a gun approached the car and broke a window on the driver’s side.

“With a gun still pointed at the victim’s face, two more men appeared from behind, forcefully throwing him into the back seat of the car. One of the aggressors then went straight for the glove compartment of the car where the victim had stashed the US$80 000.”

The source said one of the robbers was all along holding the victim by the throat in the back seat. The robbers then allegedly drove off to Matsheumhlope, where they dumped the victim and his car. Friday’s robbery comes in the wake of the car-jacking of a 44-year-old woman from Newton West suburb by armed robbers on Friday morning. The incident, which occurred at about 9.30am along Cecil Drive towards Matopos Road, saw the woman lose a Nissan Sylphy Bluebird, US$400 and a cellphone. Sunday News