ED OFF TO JAPAN 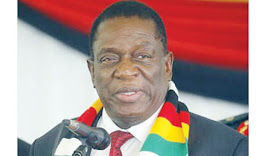 The three-day TICAD summit, which begins on Wednesday in Yokohama, has become a prime global platform through which international stakeholders join forces to promote Africa’s development.

Japan is the third largest economy in the world after the United States and China, and is also a member of the Group of Seven (G7) nations, from which Zimbabwe is seeking a financial package to clear arrears owed to international finance institutions.

G7 – made up of the world’s seven most advanced economies as described by the IMF – consists of the United States, Canada, France, Germany, Italy, Japan and the United Kingdom.

The Japanese embassy’s counsellor to Zimbabwe, Mr Kenichi Kasahara ,told The Sunday Mail that Zimbabwe will need “international help” during its reform process, which Japan is willing to provide.

“The topmost point is that the President himself, President Mnangagwa, is going to Japan and he will meet Prime Minister (Shinzo) Abe. We are actually arranging a bilateral meeting to be held on the sidelines of the summit.

“Sending a delegation headed by the President himself is an advantage in terms of TICAD.

“Zimbabwe will definitely be known; if the delegation meets the Japanese side. They can certainly impress their counterparts with their background and potential,” he said.

The indaba, he said, will likely have potential benefits for the local economy as it presents an opportunity for the country to get international support to clear its obligations to international finance institutions.

Zimbabwe owes US$2,5 billion to multilateral institutions, of which the World Bank is owed US$1,5 billion, African Development Bank US$702 million, European Investment Bank US$309 million and other multilaterals US$74 million.

As at the end of June 2019, the country’s total bilateral debt amounted to US$5,5 billion, with Paris Club creditors accounting for US$3,5 billion and non-Paris Club US$1,6 billion.

Mr Kasahara said: “I believe that TICAD can be the thrusting element in terms of development of Zimbabwe’s economy.

“Yes, Japan is a member of G7, G20 and also a member of the Paris Club, but the issue of finance must be collectively resolved with everyone’s consent.”

It is believed that the private sector will also be presented with an opportunity to pitch projects to potential investors.

One of the six sessions at the conference is specifically meant for the private sector, which will be attending its own side events.

In a statement last week, Japanese Ambassador to Zimbabwe Mr Toshiyuki Iwado, who also paid a courtesy call on President Mnangagwa ahead of the summit, said Harare can expect more assistance from this year’s TICAD summit.

“It is only through Africa developing sustainably that the world’s development will be assured. Our assistance is implemented with this in mind. Since Japan launched TICAD in 1993, the policy of Japan’s assistance towards Africa has been strengthened and elaborated even further, and our assistance to Zimbabwe can be seen by our support to rural communities,” he said.

Since 1980, Japan has provided loan aid amounting to US$346 million, as well as grant aid worth US$560 million.

Some of the developmental projects funded by Japan in Zimbabwe include the Nyakomba irrigation scheme in Nyanga, which is benefiting hundreds of households in the area.

Last year, Japan provided a US$21 million grant for a road construction project to improve the Makuti-Chirundu highway on the north-south corridor.

Japan has also provided a US$5,5 million grant for road construction materials that were distributed to eight provinces around the country.

Emergency relief assistance has also been provided to the victims of Cyclone Idai.

His visit to China in April last year unlocked funding for the US$1,3 billion expansion of Hwange Thermal Power Station, plus a US$150 million loan for the expansion of Robert Gabriel Mugabe International Airport.

Beijing also provided a US$100 million grant for the construction of the new Parliament building in Mount Hampden. All the projects are currently underway.

More projects and investments from Russia are set to be announced in October after President Mnangagwa’s fruitful bilateral meeting with President Vladimir Putin in January this year.

Visits to United Arab Emirates and Belarus, among others, have also proved to be worthwhile.

At the last TICAD summit held in Nairobi, Kenya, in 2016, Japan committed to investing approximately US$30 billion under public-private partnerships for Africa.

This year’s TICAD summit, which will be held from under the theme “Advancing Africa’s Development through People, Technology and Innovation”, will focus firmly on business and investment, giving further impetus to Zimbabwe’s investment drive. Sunday Mail