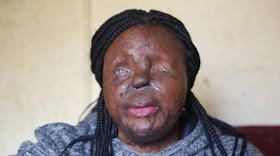 Exactly four years ago, on August 25, everything seemed to be flowing in Prisca’s life.

Married to Andrew Chikwanha for close to 11 years, blessed with a boy and girl, the couple were looking at buying their own home and were halfway into securing the property in Chitungwiza’s Unit K through a mortgage arrangement.

By then they were leasing in Westlea. “It was a Tuesday evening,” she started off narrating the events that would change her life for good, “and we arrived at the gate at our Westlea lodgings. For some funny reason, the gate was locked that day, which was not always the case.”

Her husband got out of the car to unlock and open the gate, upon which an unknown masked man approached the car, from the driver’s side, and muttered words to the effect that the couple were always a show-off.

“They threw, what at first I thought was tea, at me.” In the ensuing confusion, as she raced to their neighbours’ for assistance, with the husband struggling with the gate, the assailant got into their car and drove off.

At the neighbours, and on noticing her clothes already torn from the “tea” attack, they started pouring water on her, possibly to cool her off, which only made it worse. “My hair started to burn and where I had just felt discomfort, I became itchy.”

An ambulance was soon called, which whisked her to a private hospital in central Harare, where the medical personnel quickly opined that they didn’t have the capacity to handle her. She was transferred to Parirenyatwa Hospital, where she was diagnosed with 42 percent burns.

“No-one gave me a chance in life, but they were the words of my neighbour that kept me going, words that I kept in my mind all along. She had told me to fight for my children, that I should live for the sake of my children. Alistair was seven years then and Amanda was just three.

“As well to keep myself strong, I kept on reciting Psalms 91, especially the last stanza. My soul somehow refused to die and I can safely say that my refusal to die that day, when all the odds were stacked against me, kept me alive even up to now.”

As the days in hospital wore on, Prisca was losing her eyesight, her nostrils, her lips and all the ravishing beauty that made her the envy of many-a-boy at Zengeza High 1.

And not only that — she lost her husband in the two days following the acid attack on her, the Andrew whom she had loved and lived with for 11 years. The father of her two adoring children.

“Probably fearing that I might mentally collapse, no-one was to tell me immediately but Andrew was to disappear two days after the acid attack and has not been seen since.

“He just disappeared from the face of earth. No-one was to ever see him again. I have since filed for divorce because I cannot keeping hanging on, hoping that he will come back, being married to someone who just disappeared.”

Could the disappearance of Andrew, her childhood sweetheart, have anything to do with the attack on her? Was he the prime suspect? Could he have committed suicide in the aftermath of the attack?

“These are all questions we have grappled with since 2015 and we haven’t found an answer. The police, on the other hand, suspect he could have been the one behind the attack though there is no conclusive evidence. He left a suicide note in his tablet, addressed to my mother, asking her to look after our children. Maybe he thought I was going to die. If he disappeared, which the police suspect, he left behind his passport but his academic certificates were or are missing. I am not sure if the certificates were in the car or at home but what I remember is that on the day I was attacked, he had attended a job interview.”

Andrew was job-seeking at that time, as he had been laid off because the bank he was working for had closed shop. On the other hand, Prisca was a claims administrator with a medical aid facility.

“A week after Andrew disappeared, as I was still in hospital, I am informed an advert appeared in the local Press, announcing that he was a missing person. That is about the last thing we have heard about him.”

Prisca says their marriage was smooth sailing and there could not have been a motive for Andrew to set attackers on her, nor any other motive that could explain his disappearance. But neighbours that The Sunday Mail talked to, said months prior to the attack, Prisca’s marriage had hit troubled waters and Andrew had sent her back to her parents. Her mother, the neighbours said, insisted that Prisca should return to fix her marriage.

Andrew’s workmate at the collapsed bank said Andrew was known to be a short-tempered character.  “We used to play social soccer with him and he was really ill-tempered. As for his domestic affairs, I am not sure, as we only met at work and then over soccer during the weekends. But it is generally agreed in our social circles that Andrew is alive and maybe in South Africa,” said the former workmate.

But a day after the attack, on the Wednesday, Prisca and Andrew sat down in her ward at the hospital, to discuss whether the attack on them had been planned or was a plain robbery – the last time she was to see her husband.

“He was admitted to the same hospital for trauma and the psychiatrist who attended to him recommended him to a psychologist him for post-trauma counselling.”

He never attended any of the counselling sessions. In fact, he quietly disappeared from the face of earth. And, in a twist of fate, the Nissan March which was driven off their Westlea gate, was found abandoned two days later in the Kopje area, minus the US$600 which was in her handbag and her Samsung S5 phone. Everything else was intact. And she is still driving the car up to his day, “though I intend to sell it to cushion me as the pension I have been getting is no longer sustaining me and my kids”. In 2017, after a year-and-half without reporting for work, she was advised to retire on medical grounds, advice which she kindly took.

“Back at Parirenyatwa Hospital, I owe my life to Dr Mutamba, my eye specialist, and Dr Edwin Muguti, the head of the surgeons, for believing that I could make it. They were my angels. Dr Mutamba, for all his effort and dedication, never demanded cash payments from me, but accepted my medical aid payments. In fact he is the one who advised me to seek further treatment in India.”

With the first visit to India coming in January 2016, Prisca has been to the Asian country four times, and each time has been for a different medical procedure.

“The first time was to stitch back my lips, I didn’t have the upper and lower lips, my teeth were bare. I had to undergo complete face reconstruction over the four visits I have been to India.

“The second visit, in September 2016 was for a review as well as to open the right eye lid and have a cornea transplant. I lost complete use of the left eye.

“The third visit in 2018 was for the review on the eye as well as reconstruction of the nostrils, as I didn’t have any nostrils and was having problems breathing. So my whole face has been reconstructed, mostly using tissue grafted from my thighs.” Though she has partial vision in her right eye, she has turned down an offer for a stem cell transplant to rehabilitate the eye, “as I have been informed that there are dangers with stem cell transplants”.

Out of work, how has she managed to fund her medical trips and treatment in India? “Like I said earlier on, my life since my attack has had angels flying all over it. In the first visit my then workmates came together and pooled financial resources for me. My medical aid also covered some of the expenses.

“When I arrived in India and the hospital I was to receive treatment, I was to meet an Indian girl who had been a victim of an acid attack who had founded a not-for-profit organisation, Make Love Not Scars, which partly funded my second and third visits.

“Then a donor, who has requested to remain anonymous, came on board for the third and fourth visits. That is how the grace of God works, when we think we have reached rock-bottom, God is always there to help us out.

“Even here at home, there are days when we wake up without knowing what we are going to eat that day but somehow we find food on our table.”

Living with her mother, her father is late, Prisca says Andrew’s family has also been supportive. “His parents passed away but his uncle, father’s brother, has been helpful, here and there.”

Whether it was Andrew who planned the attack on her or not, she has since moved on with her life and is concentrating on making sure her two kids get the most out of life.

“I have made a vow that I am going to see my grandchildren and I hope God, if he has taken me this far, cannot abandon me now.

“Actually in November I should be graduating with a diploma in theology and counselling as I get back my life back on course.